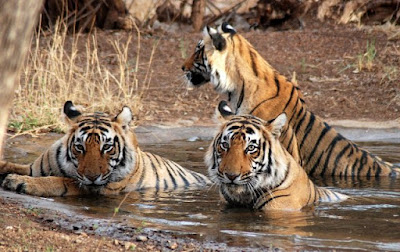 Gir Forest Reserve is open to visitors throughout the year except during the monsoon months between June and October. By far the best time to visit the park is in the winter, from December to March when the weather is cool and there are great chances of game sightings.

Best Places To Visit In Ladakh

Leh is the capital of Ladakh and also the largest town there. Leh was once the capital of Ladakh Kingdom and therefore has many historical places and monasteries. It has become a tourist hub and is connected with Srinagar and Manali by road and can even be reached by air. It is a pack packer’s heaven; cheap hotels, good food, hospitable locals and exotic culture and destination. You would find decent commuting options in Leh to visit most of the places in Ladakh.

Kargil is the second largest town in Ladakh. The town is a valley surrounded by mountain on all sides. There is not much to see in Kargil but it has an old world charm. There are many places to explore around Kargil.

Pangong Lake seemed to be the favourite destination for many tourists visiting Ladakh. Few years back it was a beautiful brackish lake known to very few people. It was relatively unknown before it got popularised by the blockbuster film 3 Idiots. After that tourists have increased manifold. Pangong Lake may be perhaps one of the most beautiful high altitude lakes in the world. It can be reached after 6 hours drive from Leh.

The Lamayuru monastery is the most beautiful monastery I have ever seen. The village is centered around this ancient monastery and is worth a visit. It is the centre of Buddhism and is one of the most revered Buddhist monasteries in Ladakh. The small village is also the host for many annual events and religious festivals. Don’t miss the strange, out of this world ‘moonscape’ just near the village.

This is another high altitude Lake but less frequented than Pangong. The Lake is pristine and exotic. It is also a breeding ground for many migratory birds and so a good place for bird watchers.

Nubra valley is full of surprises. It is also one of the greenest valleys you will come across in Ladakh. Hunder is beautiful village in the middle of this valley known for its mysterious sand dunes. It is believed to have been formed out of a river bed that dried or got washed off by forces of nature like rain and wind. It also offers camping facilities. It has a small population of two-humped camels called Bactrian camels, that can be spotted and are like an attraction of Hunder. 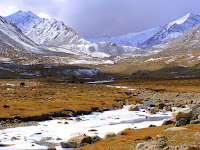 Located at an altitude of 5,360 meters, Khartungla Pass is among the highest motorable roads around the world. It is continuously overflown with slush of mud and melted ice water. The 2,000 meters climb from Leh to Khartungla will offer some exciting view of Leh and the mountains beyond, i.e., the Zanskar Range. Some adventurous folk prefer to paddle down on cycle rather than hiring a taxi. Other than the snow covered peak and the cold, there’s nothing much to see but the view is rewarding.

Literally there are forests of gompas everywhere in Ladakh. Sometimes you would see stupas even at the most unexpected places. These religious monuments are an integral part of the land. They are as old as their civilization and have experienced the test of time. These holy structures against the desolate landscapes add dimension and certain mysticism to the region.

This may come as a surprise but you’ve to cover around 500 km from Manali to reach Leh and this road is a quite an experience for bikers. The diverse landscapes are just amazing to watch. After a hundred kilometers or so from Manali, the conditions became too harsh for habitation. So there’s a vast stretch of mountains unoccupied. It was a relieving sight to me after the suffocating and overburdened plains of Central and North India. There are no inhabitants for some 300 km or so. It is just you and the road.

Zanskar is a sub-district of Kargil and one of the most remote parts of Ladakh. It is also the least visited place in Ladakh. In winter Zanskar is accessible only by foot through a frozen river. The remoteness has preserved its old traditions and so far kept them authentic and unadulterated. Residents of Zanskar are colourful people, rich in tradition and culture. You wouldn’t see such people in other parts of Ladakh. Padum is the largest town but have a meager population of around 700 inhabitants. The rest are distributed in small villages and on highlands. They keep    cattle and sometimes live a semi-nomadic life especially during summer. Note:  Both Indian and Foreign tourist are required to carry tourist permit while travelling to Pangong Lake, Tso Moriri, Nubra Valley and other destination bordering Tibet. The permit is valid for 7 days and can be acquired from any travel agency in Leh.
Posted by Srikanth Chowdary at 09:39 No comments:

The Buses have a reach into the every corners of India that trains and planes just cannot reach and match.

Growing requirement popularity of online bus ticketing, We Listed some of the web sites.

India’s number 1 bus ticketing platform, was founded in 2005 and is a part of ibiboGroup. We take pride in providing bus ticket fare with zero booking charges. You can now choose from 1500+ bus operators and 80,000 routes in India.

Travelyaari.com has solved the age old online booking problem by creating a 100% real-time bus ticket inventory system across India. With this technology, you get to view precise seats that are available and the seats that have been booked.
Travelyaari is not just an online travel agency but is an enabler of the bus travel industry in India.

Ticketgoose is today one of the leading bus ticket booking web portals of India. We serve to more than 3000 destinations pan India, aggregate 700+ bus operators with 10,000+ buses plying on 20,000+ routes. We reach customers not connected to the net through our extensive network of 6000+ agents. Through our Vahana software platform, we enable bus operators to seamlessly manage their operations.

Etravelsmart founders have brought their unique skills together to bring the most convenient travel-booking experience with an intuitive, hassle-free booking system geared towards a user-friendly customer experience. Not only are we focused on providing excellent customer service, we are passionate about social awareness concepts such as "Going Green" eco-friendly improvements and progressive changes to current business operations. eTravelSmart is encouraging innovative ideas to reduce waste and pollution while still providing convenient travel arrangements and transportation including online booking for bus.

Posted by Srikanth Chowdary at 22:51 No comments:

Top and Most Popular Travel companies in India

Yatra
Yatra is one of the best travel companies in India providing all the information, availability, pricing details and bookings of domestic and international hotels, packages, train, flights and car rentals across 336 cities.”
www.yaatra.co.in

Expedia
Expedia offers more than 75000 hotels and over 3000 holiday packages with additional features wherein a user can check the map and weather forecasts of the destination.
www.expedia.co.in